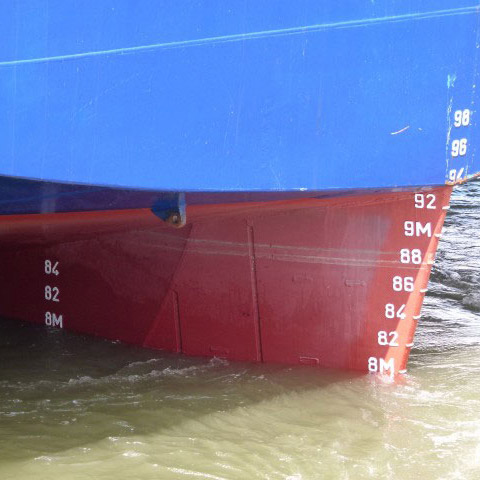 The draft of a vessel (spelt as draft in the American system or draught in the British system) is a measure of the distance between the surface of the water which meets the hull of the vessel, commonly termed as the waterline, and the keel or baseline of the vessel, which is the lowest member running in a longitudinal direction that provides support and structure to the shape of the hull.

The draft (denoted by T), the length between the fore and aft perpendicular, referred to as the length between both perpendiculars (Lpp or Lbp), and the vessel’s breadth at the upper deck (B) are commonly taken as the principal standard dimensions of a vessel. These provide important results and conclusions about the hydrostatic forces, as well as aiding in draft surveys. 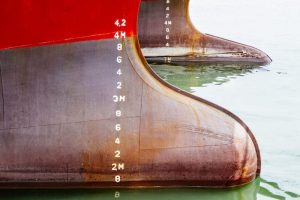 Draft surveys enable ship operators, owners and engineers to conveniently calculate various important quantities without investing significant amounts of time on trivial computations. This saves both time and money, which are equally important for cargo and passenger-carrying vessels.

The revenue made by these companies relies on maximising the cargo shipped in the least amount of possible time, and at the least cost.

In such cases, the weight being transported plays a major role in carrying out optimisation studies. Also, for warships and other ancillary military vessels, these draft surveys are significant in ascertaining the speed, turning ability, propulsion and possible resistance faced by the ship while sailing. This is done by taking into account the weight of any additional machinery or weapons that are present either on or below the deck.

For such vessels, the localised loads of machinery vary rapidly, and care must be taken to ensure that due to the high-frequency oscillations and weight of the weaponry, the deck and flooring are suitably reinforced. The weight of the individual machinery can be measured like that of the cargo.

Another important reason for carrying out draft surveys is to ensure a vessel is stable before being allowed to dock at any port. Unstable vessels are prone to collisions while in port or may even capsize while sailing, costing millions of dollars in damage and loss of revenue to both the parent company and the country of docking.

This is why port authorities diligently conduct inspections to ensure that no such untoward incidents take place.

How are Draft Surveys Carried Out, and by Whom?Draft surveys are generally carried out by inspection teams and safety officials belonging to either the parent company of the vessel or the port at which the vessel is currently docked.

These officials are tasked with inspecting the manifesto, goods, passenger and crew records, documents of the vessel, and the safety standards. Another important task of these officials is to measure and verify the draft values of a vessel.

The inspectors responsible for ensuring the safety and stability standards use small watercraft or boats to get around the ship, inspecting for any damage or wear and tear on the external hull, propellers, and rudder.

The forward section of the vessel is referred to as the fore or bow, the rear portion as the aft or stern and midship to the section which divides the vessels length into two halves.

Similarly, starboard and port are nautical terms referring to the right and left halves of the vessel, when viewed in the forward moving direction of the vessel, or from stern to fore.

In general, while carrying out draft surveys, the fore and stern drafts are taken into consideration. Since a permanent tilt of the deck of a vessel can be dangerous, corrections are made in the loading so that the port and starboard drafts match.

The points at the fore and stern where the drafts are measured refer to the fore and aft perpendiculars. These are 2 imaginary lines that pass through the vessel and serve as reference points for various calculations.

Mathematically, computing these drafts result in the most accurate values due to their relative position with the midship and centre of floatation.

Once the preliminary readings are taken, these are then cross-checked with the values noted in the stability booklet of the vessel. Along with this, the weight of the vessel is then calculated using the Archimedes principle.

Since this requires the correct density of the water in the port, a sample survey of the water is routinely conducted so that any fluctuations can be monitored.

On completion of the survey, the vessel is given a certificate of clearance from the port officials and is allowed to either enter the port or continue on her journey.